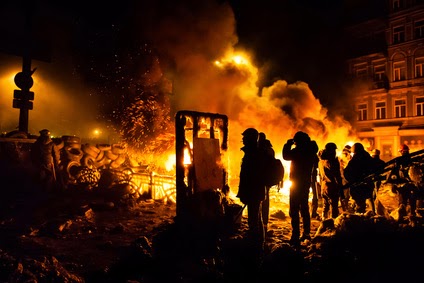 In our Emergency Preparedness course, we talk about disaster events that are very unlikely to happen, but if they do occur, the consequences can be devastating.

An extreme example would be a meteor screaming out of the heavens and landing on your house.  There is little you can to to prevent it, It’s very unlikely to happen, but would be horrible should it occur.

There are a number of events that are much more likely to occur – although still unlikely – yet most people give them almost no thought. Like the meteor example above, there may be little we can do to stop the disaster from happening, but there ARE things we can do to minimize the negative impact.

Do you remember the rioting in LA after the first Rodney King verdict?  It was essentially spontaneous.  As soon as the verdict was known, the lid came off, and the violence escalated.  If you were in the wrong place when it started, you were in immediate, life-threatening danger.

Staying out of LA on the day a verdict was to be presented would have been a prudent decision.  You have no idea how it will turn out, and some people might not like it.
The same goes with Super Bowl winners, NBA Championships and World Series final games.  People get crazy when big events happen, and that craziness often leads to violence.

But what if you’re caught totally off-guard and find yourself in the middle of a threatening situation?  Here are some ideas:

Assume the police are overwhelmed.  At the very minimum, it will take several minutes for them to arrive.  A lot of bad things can happen in 5 minutes.  You are now 100% responsible for your own well-being until they arrive, or until you can get to a safer location.

If you’re in a car, stay in it and lock all doors and windows.  Drive out of the area as quickly as possible.  If your tires are slashed, don’t stop.  Drive on the rims if need be.  Escape and evasion are your priorities.  Exit the car, and you’re likely to become a victim.

If you’re on the street, get inside as quickly as possible.  If you’re able, pick an office building before you pick a retail store, as stores are more likely to be targeted by looters.  Move to the back of the building if possible.  Try not to go to upper floors – if a fire is started, you may be trapped.

Arm yourself.  If you have a firearm, defensive spray or stunning device, have it ready and prepare yourself mentally to use it in self-defense.  If these aren’t accessible, grab whatever is available.

ALWAYS look for a chance to get to safety.

Never let your guard down.