Sometimes preparedness is more about the “minor” SHTF events than about the Zombie Apocalypse or Alien Evasion… even though they are not as glamorous.

This weekend I was cleaning out the shed and getting the lawnmower and other yard machines out and running.  It is getting close to time to mow the yard and all that fun stuff that goes along with springtime.  After chasing the mice out of the mower and cleaning out the their nests I went to fire up the John Deere and I heard that dreaded noise – Click, Click, Click.  Battery dead!

Now the worse part about it is the shed is down a hill about 100 yard from the vehicles so pushing the lawnmower to the car or driving the car to the lawnmower to jumpstart is not an option.  Taking the battery out and carrying it up the hill and hooking it up to the charger for several hours wasn’t what I wanted to do either.  I wanted to fire it up now. 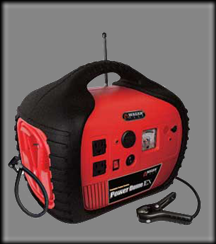 This eight-in-one portable generator was developed for multi-situational use. It’s features include a 600 AMP auto jump starter, a 1.5 foot high-pressure air compressor, a 400 watt AC power inverter, an AM/FM radio, a USB power port, an iPod input socket, a DC power outlet, and a 5 LED flashlight. This rugged machine can power anything including laptops, fax machines, and cell phones. The AC outlets also allow for electricity in any location.

I hooked up the Power Dome to the battery just like I would if I was jumpstarting from a running vehicle and presto, she fired right up!

So while I was letting the mower run to charge up the battery I was checking the tires and SHTF #2 (no pun intended…) Flat Tire!

No worries though because the Power Dome has a built in air compressor.  I hooked it up and a couple minutes later the tire was full and the lawnmower was ready to go.

One of the blessings of preparedness and self sufficiency is that these “minor” SHTF events are just that, minor.  I did not have to take my battery out and charge it for hours or worse yet, take it into town to have it recharged or take my tire off and take it in town to get aired up or BOTH!  An unexpected “emergency situation” was handled in 10 minutes instead of taking up the entire afternoon or getting delayed to another day or weekend.

Now I just have to mow the yard