By Sarah in Texas 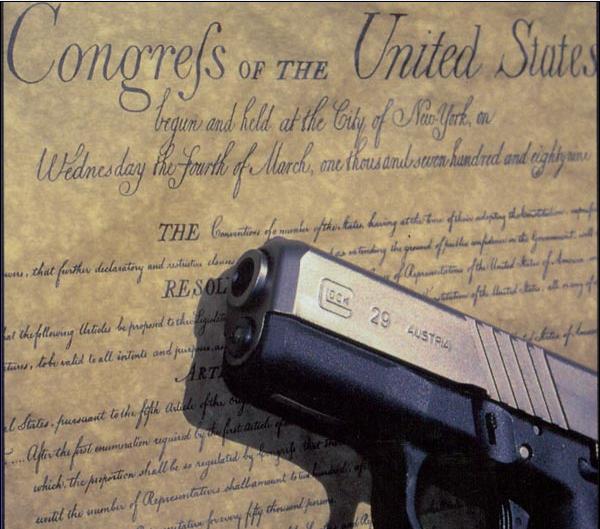 Five years ago, I got my Concealed Handgun License. Here in the Great State of Texas, concealed carry is the only legal kind for the average citizen; without the permit, you can’t carry in public. (Your vehicle and home do not count as “public,” incidentally.) Last week, my new CHL arrived in the mailbox, meaning that I’m good to carry for another five years.
In a post-SHTF environment, being armed everywhere you go is a good idea. We can’t predict exactly what our society will be like, but we know that violent people are not going to decide that they should give the rest of us a break because we’re busy dealing with huge problems (no food on the store shelves; mass panic; a highly contagious disease; whatever). These people are already preying on victims, which is why I have a CHL and handgun in the first place.
Ideally, you live someplace where permission slips to bear arms are not required. A few parts of the United States have that going for them, but I like Texas for lots of reasons. Staying here and having my CHL is less than perfect, but I love being here and will continue dealing with the license-to-carry nonsense. At the same time, a lot of us are pressuring our Legislature to do away with permits and let law-abiding citizens carry handguns without taking classes, paying fees, and waiting for our packets to process.
Some of my advice won’t necessarily apply to you. Feel free to take what you can use and leave the rest; I’m going to generalize so that the maximum number of people will get something useful (I hope, at least).

Concealed Handgun Licenses, Licenses to Purchase, and Other Permission Slips
Now is as good a time as any to find the legal path to firearms ownership and carry. Some states require a permit to buy firearms and/or ammunition; others, like Texas, don’t. It’s up to you to find out what’s required. The Internet is a good resource for this. Find your state’s official Web sites, as they generally have current statutes and other, important information. (In Texas, you’ll want to go to the Department of Public Safety Web site.)
Getting a firearm and/or permit to carry can be time consuming. I suggest starting now, if you haven’t done this already, because we don’t know when our society is going to collapse. Remember the riots following the Rodney King debacle? Store owners could not arm themselves because the state had a waiting period. Shopkeepers who’d already acquired firearms were able to defend what was theirs. Plan in advance so you don’t get caught without something you might need.

Choosing a Handgun
Which caliber? I suggest a common one, as that’s easier to find and cheaper than scarcer rounds.
Which manufacturer? That’s up to you. I like Glocks, but that’s based on my consistently good experiences with them. I suggest looking for a major manufacturer and making sure that they offer a good warranty or guarantee in case something goes wrong.
New or used? I bought my carry gun new. That’s because I wanted to be certain that the gun was mechanically sound, not worn out, and could be counted on for years to come. If you’re confident in your gun-buying skills, find a used handgun at a reasonable price.
Revolver or semi-automatic? We could discuss the pros and cons of each, but I lean toward semi-autos because I have far more experience with them than revolvers.
If you’re not sure which handgun you like, visit a shooting range. Many rent handguns. If you have a friend or relative with a gun collection, offer a box or two of ammo in exchange for a range trip that includes shooting some of those guns. The best way to figure out if you really like something is to try it. Do you test drive a car before you buy it? Probably. The same caution and diligence applies to handgun shopping.

Carry Methods and Holsters
Whether you’re carrying openly or concealed, you need a carry rig. The most-popular carry methods include:
Outside the Waistband (OWB): a holster that secures to your belt, but outside of your pants or shorts.
Inside the Waistband (IWB): same story as above, but inside your pants. Both of these methods should include a thick, sturdy belt to keep the rig in one place whether you’re walking, shifting in your seat, or even jogging or running. Good holsters will retain your handgun even if you’re upside down for some bizarre reason.
Shoulder: great when you’re in a suit or sport coat. Some shoulder holsters balance the weight by adding magazine carriers on the non-gun side.
Appendix: a holster (the Belly Band, for example, or Thunderwear) that puts your handgun somewhere around your navel. I prefer appendix carry during the hottest part of the year because I can conceal the Glock even if I’m in basketball shorts and a tee shirt.
Pocket: a convenient way to carry a sub-compact handgun.
All the carry methods should include a holster or other retention device that keeps the firearm in place. Ideally, your rig will also cover the trigger guard, which prevents things like your shirttail from reaching the trigger. A ten-dollar, pocket holster can prevent a negligent discharge, so it’s well worth the investment if you ask me.
I don’t like nylon holsters. That’s because they’re soft and tend to slide around on my belt. These rigs are inexpensive, which is one of the main reasons why they’re so appealing. However, you want a high-quality retention device because you need your handgun to stay where you put it. Good materials include leathers, plastics that have been molded for your handgun model, or combinations like Crossbreed’s Supertuck Deluxe.
Ideally, you’ll find a carry gun you really like and get a holster that’s been made for that specific model. This approach usually provides a secure, quality holster that, with minimal care, will last you for years. Look for a holster made of rigid materials; you want the holster’s “mouth” to stay open so you don’t have to holster with both hands. That can be dicey because you could sweep your free hand with the muzzle, which I don’t advise.
Holster selection is a personal thing, so I can’t recommend specific manufacturers or models. The companies I personally like best are Dragon Leatherworks, Michael’s Custom Holsters/The Holster Site, and Crossbreed. All produce reasonably priced, high-quality holsters designed for specific models.
Lots of us try more than one holster and setup before we find something that works well. Nobody else can really tell you what’s going to work best, so you’ll need to try a few things for yourself. The good news is that, when you decide that you don’t like a particular holster, you can find somebody who’s willing to swap. Many of us have a “box o’ rejects” with one, two, maybe even a dozen, discarded holsters inside. I’m happy to let the rest of my family raid the stash.

Practice, Practice, and Practice Some More
In my opinion, those of us with firearms should practice several things. For self-defense handguns, I suggest you work on:
Safe Firearms Handling. The saying, “Train like you fight,” is sometimes negative courtesy of sloppy or bad habits. If you practice drawing your handgun without paying attention to what your trigger finger is doing, how are you going to draw when the firearm’s loaded and ready to fire?
Colonel Jeff Cooper came up with The Four Rules, which apply to all firearms:
“1. All guns are always loaded.
2. Never let the muzzle cover anything you are not willing to destroy.
3. Keep your finger off the trigger until your sights are on the target
4. Always be sure of your target.”
Other rules exist, like “put down your firearm before crossing a fence.” That’s a good one, but I think that The Four Rules cover that situation and many others. Regardless of which version of the various, firearms-safety rules you prefer or follow, the idea is to safely handle your weapon at all times.
How do you practice these rules? Whenever you pick up a gun, think about what you’re doing even if you have to actively recite the safety rules in your head while you’re on the firing line.

Drawing. Whether your firearm is concealed or not, you should be able to quickly draw that gun. In some situations, you might not have more than a few seconds, if that long, to take action. Besides, rehearsing helps train your body to do what needs to be done, reducing the odds of freezing in panic.
Unload the firearm or use a blue gun. (Not all of these obviously fake training guns are actually blue, by the way.) Draw slowly at first, making sure that each motion is correct. As you keep practicing, you’ll naturally speed up.

Shooting. You don’t have to get all your shooting practice at the range and/or with live ammo. With “snap cap” or dummy rounds, which are designed to protect a firearm you dry fire, you can safely and comfortably work on things like your stance, trigger squeeze, and sight alignment without leaving the house.
I also suggest some formal instruction, mostly because a qualified teacher can show you what you’re doing wrong and how to correct it. This doesn’t require thousands of dollars’ worth of gun school. You can take a basic class to establish a solid foundation.

Maintaining Firearms and Accessories
I’m not the sloppiest firearms owner, but I’m also not the neatest. My current carry gun does not need to be cleaned after every range trip; it’s fine for thousands of rounds, though I don’t put off cleaning the gun for that long. However, I make sure the gun stays well lubricated, as that prevents quite a few problems.
Each handgun is different, so I can’t recommend one cleaning schedule for everybody. Regardless, you should regularly inspect the weapon and accessories (including magazines if applicable) for wear, rust, corrosion, cracks, and other problems.
Having spare parts on hand is a good idea. If you know how to replace tiny springs and other, internal parts, you can buy them in advance and store them someplace safe. Does completely tearing down your gun scare you? Same here. I have a gunsmith/armorer, who also happens to sell guns, who’s happy to help me out. For seventy bucks, he’ll completely disassemble my gun, clean everything, and replace parts that are likely to break or fail within the next year or so. He’s worth every cent.
Extra magazines are great. I recommend having at leastthree per handgun, but feel free to pick up more. You can also buy parts kits to replace magazine springs and followers, which might be worth the money. If you can get the kit inexpensively enough, or if you can’t find new magazines for a really good price, why not replace worn parts?

Ultimately, a handgun is only as effective as its owner or user. Keep that in mind when you’re gun shopping, shooting at the pistol range, or inspecting your handgun and carry rig for problems. Diligence on your part makes you a better gun owner, which is better for your safety and, possibly, life. If or when TSHTF, having both the firearms and skills puts you a step or two ahead of the people who might otherwise use force to take what’s yours, including your life.