Found this over at Armageddon Medicine 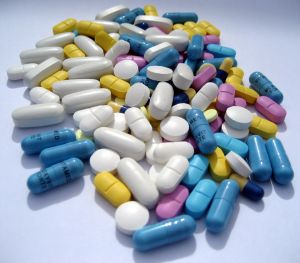 Are over-the-counter (OTC) drugs really worth stockpiling?  As a family physician my answer is a resounding yes.  Most of the following were actually prescription medications when first released.  (In higher dosages, several still are.)  Although other OTC drugs are worth considering, these ten have been selected due to their ready availability, affordability, safety in both adults and children, and multi-use potential.  Used alone or in combination, they can effectively treat dozens of conditions including:  headache, fever, sore throats, ear ache, menstrual cramps, heartburn, arthritis, ulcers, diarrhea, allergies, hives, congestion, dizziness, mild anxiety, nausea, vomiting, poison ivy, athlete’s foot, ringworm, eczema, insomnia, backache, gout, diaper rash, yeast infections, and many more common illnesses.

1.      Ibuprofen (Motrin, Advil)– Among the OTC anti-inflammatory medications, ibuprofen is probably the most versatile.  Primarily indicated for pain and inflammation, it may also be used to relieve headaches, earaches, sore throats, sinus pain, stiff neck, muscle strains, menstrual cramps, arthritis including gout, and back pain.  It is also effective at reducing fever and is generally safe for use in children.  It is not advisable for most stomach-related pain, although may decrease the pain of kidney stones, kidney infections, and possibly bladder infections.  The most common side effect is stomach irritation or heartburn.  When combined with acetaminophen it is nearly as effective as codeine, tramadol, or hydrocodone in relieving more severe pain.

2.      Acetaminophen (Tylenol)– Acetaminophen is the only OTC pain-reliever that is not an anti-inflammatory drug.  It will not irritate the stomach like ibuprofen, aspirin, or naproxen.  It is useful for the same conditions as ibuprofen, though effectiveness varies according to patient.  As mentioned above, it may be combined with ibuprofen in full doses for more severe pain.  Side effects are very few, though in high dose, especially when combined with alcohol, it can lead to liver failure.  It is available in several pediatric dosages, both for pain relief and fever reduction.

3.      Diphenhydramine (Benadryl)– An inexpensive antihistamine, diphenhydramine is primarily used for drainage due to respiratory infections and nasal allergies, in both adults and children.  It is also indicated for hives and itching, including itchy rashes such as poison ivy.  Although not all patients become drowsy when using diphenhydramine, many do so, making this medication useful for insomnia as well.  Some people find the drug relieves nausea or mild anxiety.

4.      Loperamide (Imodium)– The most effective OTC medication for diarrhea is loperamide, which is available both as tablet form and liquid for children.  It is often useful for relieving intestinal cramping.

5.      Pseudoephedrine (Sudafed)– Pseudoephedrine is effective at relieving congestion of both the upper and lower respiratory tract due to most common causes including infection, allergy, chemical irritation, and mild asthma or bronchitis.  It frequently has a stimulatory effect, similar to caffeine.  The most common side effects are those resembling a burst of adrenaline:  rapid heart rate, palpitations, and increased blood pressure.  Years ago this drug was used in young children, even babies, though now most pediatricians do not advise it in patients younger than about six years old.

6.      Meclizine (Bonine, Dramamine)– This antiemetic drug is available both over the counter and by prescription.  It relieves nausea, vomiting, motion sickness, and vertigo-like dizziness.  For some patients it causes drowsiness, and therefore may be used as a sleep aid.  It is related to medications for anxiety and may help with this as well.

7.      Ranitidine (Zantac)– Although several medications are available OTC for the treatment of heartburn, ulcers, and other acid-reducing conditions, ranitidine is among the best-tolerated, is inexpensive, and is also useful for relieving hives. Doctors often advise an acid-reducing medication such as ranitidine for patients who experience stomach upset when taking ibuprofen, though this must be done with caution.

8.      Hydrocortisone cream– The 1% version of hydrocortisone is the strongest steroid cream available over the counter.  It is safe for use in both adults and children in treating inflamed and/or itchy rashes such as eczema, poison ivy, diaper rash, and other minor genital irritations.

9.      Bacitracin ointment– This ointment is best used to prevent skin infections when the integrity of the skin has been breached, as by an abrasion, laceration, insect bite, or sting.  It also may be used to treat a superficial skin infection such as a mildly infected wound or impetigo.  It is less likely to produce a topical skin allergy than other topical antibiotic preparations that contain neomycin.  It cannot be used to treat deeper infections, however, which generally require an antibiotic by mouth.

10.  Clotrimazole (Gyne-Lotrimin)The same antifungal medication, clotrimazole, is contained in both Lotrimin and Gyne-Lotrimin.  Gyne-Lotrimin may be used to treat both female yeast infections and any other yeast or fungal infection that Lotrimin would treat, including athlete’s foot, jock itch, ringworm, diaper rashes, and skin fold irritations.

Conclusion
For under $50 total a good supply of all of the above can be purchased.  Several of these medications are also available at higher doses by prescription, and may actually be less expensive if obtained from a physician (ranitidine, meclizine, loperamide, and diphenhydramine), even paying full price.